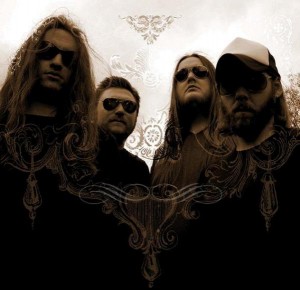 London’s Sons Of Merrick in association with Sounds Of Caligula recordings are proud to announce that they have signed with Hydrant Music/EMI Music Japan exclusively for Japan. The first release from this deal will be a new, enhanced edition of Sons Of Merrick’s debut, “Tight Nerves & Suavity”, expanded with no less that 9 exclusive bonus tracks, including the whole of their highly limited, original demo-album, 2007’s “Hip Cracking Spell”. Originally released in Europe by Sounds Of Caligula, “Tight Nerves & Suavity” was described by Kerrang! as “Deliciously heavy… recalls Sabbath or Zep at their most monstrously grandiose and commanding”, where as Metal Hammer reckoned their “deep, dark grooves will be lapped up by disciples of Down, Kyuss and COC””, and by Big Cheese as a “loads of meaty riffing, thundering percussion, and slimy, greasy melodies”. After playing them on his BBC6 radio show, Iron Maiden’s Bruce Dickinson reckoned Sons Of Merrick were, “severely mentally impaired and damaged people making this kind of music… however, it was rather good!” As Hydrant Music is the Japanese home for Rival Sons, Bigelf, Three Inches Of Blood and The Union, the band that Metal Hammer described as dealing in “huge great dirty slabs of southern rock with the lascivious swagger of Mötley Crüe and the true grit of Pantera”, they seem to have found a perfect label for their music to be represented in Japan. Sons Of Merrick are currently putting the finishing touches to their sophomore release, “Of English Execution”, which is being readied for a European release during the first half of 2012. With titles such as ‘Bag of Ants’, ‘Hideously Taloned’ and ‘Bowels of Britain’, “Of English Execution” is shaping up to be a worthy follow up. For more sounds, pics and news of gigs in 2012, go to: www.myspace.com/sonsofmerrick