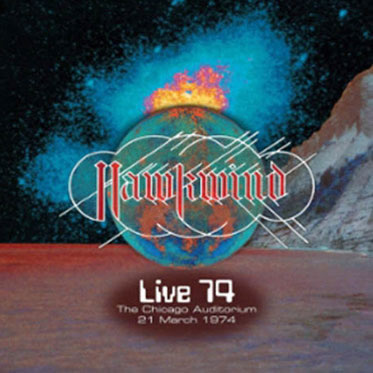 “Hey Hugh!” Asked Chrissy enthusiastically, “Can you get us some tickets to see HARK-WIND?” Hawkwind? But this is 1988! Didn’t they have a hit about…200 years ago? Shouldn’t those Psychedelic Warlords have disappeared in smoke by now? Chrissy and Lorena, two lovely Californian girls I’d met at a Robert Plant gig in Guildford earlier that year, weren’t aware that liking those perennially unfashionable Hawklords was UNCOOL, MAN! Sure, there was a resurgence in their popularity as the 70s became the 80s, when the band benefited from the rise of the NWOBHM (New Wave Of British Heavy Metal), ’cause heads and metal heads alike dug the ’Wind, but this was 1988, baby. Being American, Chrissy (a ringer for Heart’s Nancy Wilson) and Lorena weren’t to know any better, what with their Anglophile fetish for Ziggy-era Bowie and posters of Jimmy Page in his silk pyjamas and a cigarette dripping rakishly from the side of his mouth. They once made me take them to Headley Grange in Hampshire, as Zeppelin had recorded an album or two at this decrepit pile (it was obscured by scaffolding on the day we went). They even made a pilgrimage to Cheltenham to visit Brian Jones’ grave. Now, what was THAT about?
I purchased three tickets in row Z of the Hammersmith Odeon for Hawkwind’s April ’88 tour, apologising profusely to my American friends for the huge distance to the stage from our seats. No matter, as these were good seats by American Enormo-Dome standards, apparently. “Harvey Bainbridge, are you receiving me, over?” rang Dave Brock’s voice across the PA system. I had to laugh, not least at myself, as I expected the women in the white lab coat standing centre stage to start dancing Stacia style, rather than standing as still as a mannequin. After three numbers I realised it was in fact a mannequin.

Travel back in time by 14 years (and I’m sure if any band can do that, then Hawkwind are capable of such a feat) to 1974, and the Intergalactic Spaceship, with its six brave musicnauts and exotic dancer, are making a second trip across to the U S of A, bringing their unique brand of space-rock to the colonies. This second visit proved more successful than their first, as they were developing a stronger following, especially in the States’ industrial cities. Los Angeles had its own, insular scene, but mid-west, having been fed on a diet of Led Zep, downers and wine, were ideal and willing victims for Hawkwind’s aural assault. Successfully filling 4,000 seat plus halls, it was a far cry from the band of psychedelic jesters from Ladbroke Grove who would set up outside festivals such as the Isle Of Wight and play for free to any heads who were prepared to listen.

In 1974, Hawkwind were still riding on a crest made by having an unexpected hit single with ‘Silver Machine’ (UK #3 chart in 1972). The song had originally been recorded live at Chalk Farm’s Roundhouse in North London on 13th February 1972, which also resulted in the Greasy Truckers Party album. Bob Calvert’s original vocal performance was considered “unsuitable”, thus relative new boy bass player Lemmy Kilmister (later of Motorhead fame) over dubbed the vocals at Rockfield Studios in Wales. The result was that Lemmy became viewed as the front man, almost by default, leading to much resentment from the rest of the band. Lemmy appearing alone on the cover of an NME feature did nothing to dispel their rankled attitude to their bass player. An accompanying live album, Space Ritual, recorded at the end of 1972, became a hit the following year, and so Hawkwind were tipped for major success.

Unfortunately, they managed to scupper their career somewhat by issuing ‘Urban Guerilla’ as a follow up single at a time of increased terrorist activity from the IRA. None the less, Led Zeppelin’s initial forays across the American continent in 1969 had left a trail wide open for English hard rock bands from Black Sabbath to Uriah Heep to clean up on a never ending touring circuit, on foundations that had been laid by The Beatles and The Stones back in 1964.  Featuring Hawkwind’s perennial leader and founder Dave Brock on guitar and vocals, this line-up of the band were augmented by Lemmy on bass, Nik Turner on vocals as well as a variety of wind instruments, Simon King on drums, Simon House on keyboards, synthesiser and violin (aboard to replace the soon departing Del Dettmar, here heard on one of his last outings before moving to a log cabin in Canada). Fronted by the statuesque dancing of Stacia, the tour was dubbed “The 1999 Party”, taking label mates Man in tow as support. This tour was generally considered a success, certainly more so than their debut visit, and was notable for a freak tornado with winds of 120mph taking the roof off their hotel in Nashville. As the band had recently had their first introduction to the drug THC, it’s debatable whether or not they noticed the missing roof, or the windows shattering in the ice rink where Lemmy was apparently skating (!). The San Francisco gig of the tour was a benefit for imprisoned hippy guru Timothy Leary, who even phoned through doing the show, and was broadcast across the PA. The band were paid in weed for their troubles.

The gigs at the Chicago Auditorium on 21st March 1974 and the Michigan Palace, Detroit on 23rd March were both recorded by Roy Thomas Baker (soon to find fame as Queen’s producer), the Chicago gig eventually issued by EMI in 1997. The set featured then unrecorded tracks from the forthcoming Hall Of the Mountain Grill, ‘Psychedelic Warlords (Disappear In Smoke)’ and ‘You’d Better Believe It’, as well as future single ‘Paradox’. Paradoxically, their one hit ‘Silver Machine’ was absent from the set. Though bands like Sabbath and Purple did issue the odd rare 45 single, they appeared embarrassed to play them if they became a hit. This trimmed down edition of the Chicago show kicks off with ‘Brainbox Pollution’, which had originally been the b-side of the aforementioned ‘Urban Guerilla’ (again, not featured here), followed swiftly by ‘You Know You’re Only Dreaming’, and arguably Hawkwind’s other anthem, ‘Brainstorm’. ‘Seven By Seven’ had been the appeared on the flip of ‘Silver Machine’ and ‘You’d Better Believe It’, which would appear as the b-side of ‘Paradox’ (what is it about these bands who prefer to play their b-sides over their A-sides?). ‘The Psychedelic Warlords (Disappear In Smoke)’ is a worthy taster from what would be issued as Hall Of the Mountain Grill in June that year. ‘D-Rider’, ‘Master Of The Universe’ and ‘Welcome To the Future’ complete this set.

Hall Of the Mountain Grill would become one of their most successful LPs to date, charting on both sides of the Atlantic. In some ways, it was a peak for the band in many ways. Capitalizing on their initial Stateside success, they returned to America in September 1974, only to have their gear impounded for non payment of taxes from the previous tour (as it had only broken even, they figured they weren’t liable). The following year saw the release of their last United Artists LP, Warrior On the Edge Of Time, which in many respects was an end to the band’s golden era. Following a Reading festival gig, Stacia decided to hang up her dancing shoes, and was married the following day. When Lemmy was found in possession at the Canadian border (they assumed the powder about his person was cocaine), he was bailed out long enough to play that night’s gig, only to be unceremoniously fired from the band. Lemmy formed Motorhead that year, and has never looked back. Hawkwind have carried on their singular path with a variety of line-ups, all fronted by founder member Brock.