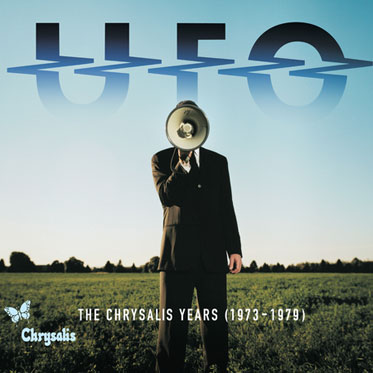 UFO’s musical odyssey started in 1969, when singer Phil Mogg was joined by drummer Andy Parker and bassist Pete Way. This trio would become the backbone of the band for the next 13 years, and mainstays for much of UFO’s forty-plus year career.

The band’s first three albums, recorded for Beacon Records, feature guitarist Mick Bolton, who was briefly succeeded by Bernie Marsden (who would later go onto fame and fortune with Whitesnake). According to popular legend,  Bernie didn’t make the ferry in time to play at a gig with the band in Germany after forgetting his passport. Although UFO meant little in the UK outside the club circuit, they had built a sizeable cult following with their three Beacon records, in both Germany and Japan. Michael Schenker was swiftly deputized from support band Scorpions to fill in on the night.

What were the circumstances of that night, and which songs would have been played that Michael could have picked up so quickly?

PHIL MOGG: We had seen Michael playing with Scorpions previously, and thought he was just what we were looking for. On the night that Bernie didn’t make it we were desperate to play and get paid, just in order to get back home, to get petrol and food etc.- let me pull on your heart strings. We asked Scorpions if we could borrow Michael, and they said yes, so after their set Pete and Michael sat in the back of a car and worked on ‘C’Mon Everybody’, ‘Who Do You Love’ and ‘Boogie For George’, which we managed to fill out for a whole set, jamming.

So when did Michael become a permanent fixture in the line-up? Was it clear from that first gig that you’d found your new guitarist?

PHIL MOGG: After that we got in touch and asked if he would like to join the band. We were sure it would work out; he said yes, and so we had our guitarist.

Michael not only offered a lot visually and sonically, but despite being only 18 years old, brought some very mature composition skills to the band too. Chrysalis released a single, ‘Give Her The Gun’, in 1973, followed by the Phenomenon LP a year later. Did you already have interest from Chrysalis Records prior to Michael joining?

PHIL MOGG: We were originally with the Chrysalis booking agency through some connections with the old Marquee Club. Kenny Bell, maybe? Small independent companies had a great deal of credibility at that time, and that’s where we wanted to be. So we asked, and got the deal, although I am sure there was a bit more to it than that.

With Leo Lyons from Chrysalis alumni Ten Years After producing those first three Chrysalis records, and Ten Years After’s Chick Churchill making an appearance on 1975’s Force It, how much influence did the label have, and how much creative freedom did they afford the band when it came to career decisions?

PHIL MOGG: The record company was great, and gave us a great deal of freedom of choice, and help. We were happy with our lot.

This collection features a previously unreleased live recording from UFO’s first US tour, in November 1974. What were your first impressions of America? Following Zeppelin, Sabbath and Purple, did it feel as if UFO was part of a “second wave” of English hard-rockers sweeping the States, and when did it become apparent that you were developing a healthy following in the US?

PHIL MOGG: The USA releases had been Phenomenon, Force It, No Heavy Petting, for which we played everywhere, from the east to west coasts, and all points in-between, from being the first band on of a three act bill, like Chrysalis’s Jethro Tull, the Doobies, and later Rush etc. Plus any clubs, bars or pizza parlours that would book us. Up to Lights Out, when we really started to break out, to Strangers…, which was really the cherry on the cake, when we started our own headlining and co-headlining tours, with Judas Priest, AC/DC, Cheap Trick…all of whom were on the up and up at the same time.

Paul “Tonka” Chapman didn’t feature on any UFO albums until 1980′s No Place To Run, but had been a part of the band’s line-up, alongside Michael, as early as 1974. Was there ever a consideration to keep twin guitars, with both Paul and Michael?

PHIL MOGG: We had tried twin guitars with Paul and Michael, and it worked 50% of the time, but I don’t think Michael was destined to play with another lead guitarist, so then we tried keyboards [with Danny Peyronel] , which didn’t work, but found the solution with Paul Raymond on keyboards and guitar. Now that worked for us.

UFO’s Chrysalis catalogue is a very strong, consistent body of work, in terms of both musicianship and song writing. The records also featured some very striking and impressive LP jackets, designed by Hipgnosis (famed for their work with Led Zeppelin and Pink Floyd, among many others). How much input did the band have into the sleeve designs, and are there any particular favourites, or least favourites?

PHIL MOGG: We had very little input with Hipgnosis. There wasn’t much point when nearly everything they came up with was spot on, and out there. The only one that really didn’t come up to scratch was (1983′s) Making Contact, but the rest shine, and are much loved, as are Hipgnosis’s Storm [Thorgerson] and Po [Aubrey Powell].

Michael appeared to develop a habit of regularly leaving the band, sometimes mid-tour. What would prompt this, and what was the attitude towards Michael in the band when this happened?

PHIL MOGG: Michael’s habit of “popping off” during tours was a real pain in the butt, as these tours had been booked, promoted, tickets sold, audiences pissed off,  band pissed off, crew pissed off…but stuff happens. Michael was having some problems, and this was his way of coping with them. Perhaps if he had tried to continue the tours, he may not be with us today, god bless his cotton socks.

Lights Out and Obsession were produced by Ron Nevison. Was this to deliberately give the band a more polished, radio-friendly sound, and did you get a sense that the band were on the verge of a major international breakthrough with these albums, especially Stateside?

PHIL MOGG: Ron Nevison’s name came to us by looking at who engineered some our favourite records, and his name kept coming up, so we asked Chrysalis if we could get him to do ours…and the years of torture had just begun, but don’t you just love him? He moved us that little bit extra, which makes all the difference, and gave us some top ten hits. Some things come just at the right time, as I think that Ron did.

Michael played his last dates with UFO in October 1978, some of which were recorded for what would be released the following year as the double live Strangers In the Night. Apparently Michael had already announced he would be shortly leaving the band. Was this the case, and if so was it strange making a live LP with someone who would soon be departing?

PHIL MOGG: The Strangers… album, with Michael departing at that time, wasn’t exactly a surprise; Michael had been and gone and come back many times. It was a case of get on with finishing the album, which we did, with much love and kisses all round, and a joyful comeback together for Obsession. All the lads, and Ron and the ever present Mike Clink engineering.

Released in January 1979, Strangers In the Night proved to be the band’s major breakthrough, with the album making the UK Top Ten, and the live version of ‘Doctor Doctor’ becoming a hit single too. As an impressive showcase for the band’s live show, as well as serving as a “best of” the band’s Chrysalis recordings from the past 5 years, was it strange promoting an LP featuring Michael when he was no longer part of the line-up?

PHIL MOGG: Strangers… was the one that really sold us, but Lights Out was the stepping stone, just as the other albums that went before had been. It was a nice slow build up, and came just at the right time. It was a shame that Michael wasn’t there to enjoy the success, as he had put in as much work as everybody else. But that’s the way it went down, and that’s the way it is - old Chinese proverb.

Why do you think there had been such a turnover of lead guitarists within UFO’s ranks, and what made Pete Way, Phil Mogg and Andy Parker such a solid unit throughout this period?

PHIL MOGG: Guitarists, we’ve had a few, but we have had a stable diet, on and off, of Mogg, Way, Parker, Raymond…but even that has changed from time to time. There was the “Tonka” period with Neil Carter, and many others coming and going, all of which brought their own special flavour to the band. Rockin’…

Hugh Gilmour
London 2011
with special thanks to Phil Mogg