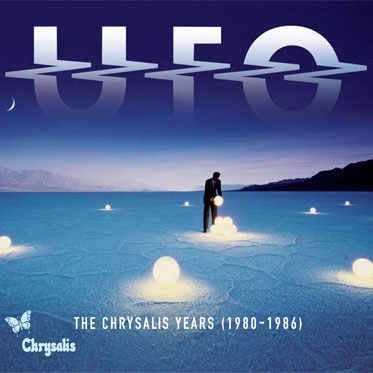 UFO originally formed at the tail of the 1960s around the core trio of vocalist Phil Mogg, bassist Pete Way and drummer Andy Parker. After three relatively obscure albums for Beacon Records, the band found their form with the addition of guitarist Michael Schenker, signing to Chrysalis Records for 1974’s Phenomenon LP. Over five years, and five studio LPs, the band became a massive draw on both sides of the Atlantic, culminating in the breakthrough double live LP, Strangers In the Night, released in 1979. Although the young German guitarist had been known to go AWOL before, Schenker quit UFO for good (until rejoining the band in the 1990s) at the end of 1978’s Obsession tour. At the peak of their commercial pulling powers, the band soldiered on with a fresh line-up for 1980’s No Place To Run. Augmented by keyboard player and rhythm guitarist Paul Raymond, the line-up was completed by Lone Star lead guitarist Paul “Tonka” Chapman. Chapman had been deputized on a number of occasions, whenever Michael would inconveniently disappear mid-tour, and had even been part of a “duel-guitar” line-up with Schenker as far back as the Phenomenon tour.

How and when did the band first meet Paul Chapman?

PHIL MOGG: Paul had come down from Wales for an audition in the early 70s, in Walthamstow. He was well late; maybe he had got a little lost, but we found

him round the corner,in an old duffle coat, lost,wih a cardboard box guitar case
and a half finished bottle of Mateus rose wine. He looked happy.

Michael was an important part of the band. Was there any other guitarists lined up or under consideration to replace him, or was Paul Chapman the only choice?

PM: There were quite a few named guitarists, but we needed someone  who could take the pace without cracking up; Tonka toys as you know are virtually unbreakable.

After a successful relationship with producer Ron Nevison, what prompted a switch to using legendary Beatles producer George Martin, at Martin’s Air Studios on Montserrat and in London, and were you happy with the results of working with such a famed producer?

PM: Chrysalis Air studios Montserrat…sort of a family affair, plus George Martin and Geoff Emerick were both the finest pair of gents, and a true pleasure to work and play with. An added extra was we needed a holiday on a wonderful island in the sun.

Despite the loss of Michael Schenker, the band were a massive live draw, easily able to sell-out multiple nights at London’s Hammersmith Odeon, or the Forum in Los Angeles.

PM:  When Michael left we were at a peak. Shame he missed it, after all the work he had put in, but the band just kept sizzling and selling.

You’d had a very strong songwriting partnership with Michael Schenker that had a huge impact on UFO’s commercial success. Did you feel a great loss or change in the band after Michael’s departure, or did you feel a need to prove that the band could easily continue in his absence?

PM: It was obviously a loss, but I still had a strong writing relationship with Pete, and as we had done some of the major stuff, we also had the attitude of well this is how it is, so let’s get on with our thing.

No Place To Run was released in January 1980, and was followed up a mere year later by The Wild The Willing And The Innocent in January 1981. Today, where bands happily take 5 years or more between albums, the band were showing no let up in productivity. I assume this was a very positive period for the band?

PM: A positive period after No Place To Run. Chrysalis, for some god forgiven reason, gave us the opportunity to do the Wild The Willing… at Air 1 on Oxford Circus on our own??? Not to be passed up! One of the most fun albums we have done; we were working as one, so coming up with material was not a problem. Easy.

The Wild The Willing And The Innocent was actually UFO’s ninth studio album since the 1970 debut, but is still an impressive collection of songs. As well as the singles ‘Lonely Heart’ and ‘Couldn’t Get It Right’, album tracks such as ‘Chains Chains’ and ‘Makin’ Moves’ would soon become firm live favourites.

After a short stint with his former band, Scorpions, Michael Schenker formed the Michael Schenker Group, releasing his eponymous debut in 1980, also for Chrysalis Records, followed by sophomore effort “MSG” a year later. One noticeable addition to Schenker’s new band was keyboard player and rhythm guitarist Paul Raymond. Were you surprised when Paul appeared to “defect” to Michael’s new band?

PM:  No… more relieved that anything else… less mascara for the band to buy!

The Wild The Willing And The Innocent featured Paul Raymond’s replacement, Neil Carter (following a stint in the short lived Wild Horses) on keyboards, guitar and saxophone. Although Carter did not contribute any songs to this album, he would evolve into an important contributor to the band’s output on the following albums, and later become an important musical foil for Gary Moore throughout much of the 1980s. What did Neil Carter bring to the band, and did you feel that there was a certain resistance from the fans as keyboards became a more dominant fixture in UFO’s sound?

PM:  Neil Carter was a great contributor, Neil bought a great stability and talent, as he could play anything and everything; he could sing and even tap dance. At this period we also gained a whole new legion of fans, who to this day refer to it as the Chapman-era.

The Wild The Willing And The Innocent was produced by the band themselves. Did this reveal a growing confidence within UFO, that you felt you could do a good enough job yourselves, or did it create any rifts or tensions?

PM:  No rifts or tensions here, only the smell of madness.

Mechanix, released in February 1982, was UFO’s tenth studio LP, and their best chart placing since Strangers In the Night reached the UK Top 10 three years earlier. How aware were you of the New Wave Of British Heavy Metal at this point? Bands such as Iron Maiden and Def Leppard were happy to admit a big debt to UFO’s influence.

PM: The Mechanix album i believe was done in switzerland with gary lyons sort of producing. UFO was in their bubble, a nice cosy place to be, so you would only see the musical press occasionally, so we weren’t aware of this New Wave Of British Heavy Metal thing, which I guess bit us on the arse later!

One major change for the band at the end of the Mechanix tour was the departure of bassist and founder member Pete Way. Sometimes Pete’s contribution to the band, both as a songwriter on record and a showman on stage, could be somewhat overshadowed by his and the band’s offstage antics. Pete’s departure in 1982 must have left a huge hole in the UFO?

PM: Pete’s departure was a bit of a bummer, particularly as he didn’t tell us, and we had to read it in the press. Nice one Pete. I think at this point things started to unravel, and after the last tour with Billy Sheehan and then Paul Gray on bass, I think a rest and look at everything was in order. We’d been on the road non stop and at a brutal pace since 1971.

It was initially announced that Pete Way would be joining “Fast” Eddie Clarke, recently departed from Motorhead, for a new project called Fastway, beforequickly jumping ship to form his own band, Waysted. Initially recording the album Vices for Chrysalis, in between reunions with Phil Mogg in both UFO and Mogg-Way, Pete has steered Waysted through various labels and line-ups to the present day.

Reduced to a four piece, essentially with Neil Carter and Paul Raymond doubling up on bass guitar duties, the band released the Mick Glossop produced Making Contact in 1983. Initially with Billy Sheehan (Talas, Mr Big and Dave Lee Roth) on the bass guitar, followed by The Damned’s Paul Gray for the remainder of the gigs, the band announced they’d be splitting up after this, their farewell tour. Did a split seem inevitable?

PM:  Following this when Pete left, Paul Chapman played bass on the album

A new, albeit short-lived version of UFO did tour in 1984, did it not?

PM: 1984? If that was the  High Stakes And Dangerous Men  album…cool album. Kit Wolven produced and we managed to blag the great Terry Reid and the adorable Stevie Lange for some vocals. Oh vocal joy! Whether or not this was 1984 is debatable, cos it would of meant my wife was 15.

Did you consider or make any moves to start a “solo” career, and did you seek or receive any offers to join or form another band beyond UFO?

PM:  Solo career, yes, still considering it, had some offers from other bands but it would mean getting to know a whole bunch of other musicians.

UFO reformed once more in 1985 with new guitarist Atomik Tommy M, former members Paul Gray and Paul Raymond alongside drummer Jim Simpson. Despite the rain, this new incarnation of the band was a definite highlight of 1985’s Knebworth Fayre, headlined by Deep Purple Mk2 playing their first UK show together since 1973. Were you surprised by the great reaction from the fans, to find that UFO had evidently been missed?

PM:  Atomik Tommy [and the] Misdemeanor album…yeah. After the initial burst of energy, we had high hopes for the album,  but nothing’s guaranteed…

A number of new songs that were given an airing at Knebworth appeared on their next, and last Chrysalis album, Misdemeanor, released in November 1985. Although the press reception, especially from Kerrang! magazine, seemed pleased to have UFO back, the album failed to live up to the expectations set by UFO’s past catalogue. New, harder, faster and heavier bands, such as Metallica, Anthrax and Venom, were the order of the day. Were you disappointed by the relatively poor sales of Misdemeanor?

PM: …there was an air of disappointment all round, [but] still shit happens.

UFO carried on in various forms until reuniting the classic Mogg/Schenker/Way/Parker/Raymond “Strangers In The Night” line-up for 1995’s Walk On Water.  Seemingly inevitably, Schenker quit following the release of 2002’s Sharks, and tours with a reformed MSG. In 2009, UFO released their 19th studio album, the critically acclaimed The Visitor, and are reputed to be working on their 20th opus.

PM: The “Strangers In The Night” line-up was for “Walk On Water”. “Strangers…” was a one off, as was “Obsession”, [which] afterwards, [one] can’t go back. “Sharks” rocked, and was great fun, with the comical and fantastically tight Mike Varney (of Shrapnel Records ) producing; Ainsley Dunbar on drums; good times on the chicken farm in Cotati… then “The Visitor ” back in Europe. As for forty years in a band…impossible, I’m only fifty, which means I joined the band when I was ten!

Hugh Gilmour
London 2012
With special thanks to Phil Mogg