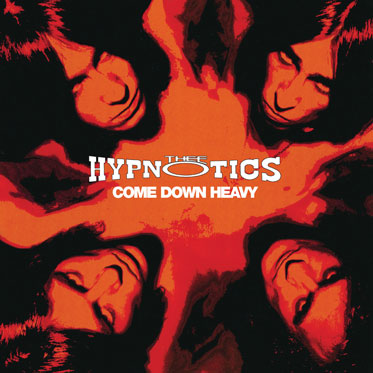 Are you ready to testify? Ladies and gentlemen, I give you a testimonial…Let It Come Down Heavy with Thee Hypnotics!

“There’s a lot of elements in music in there that have been forgotten between the hybrids that have developed. There’s no f**king soul left in music anymore. But it’s much easier said than done. It always seems we’re in a struggle with technology. You sometimes listen to a guitar straight from an amp, and then in the booth, I don’t know, it’s like burning a house down to light a cigarette.” Jim Jones, 1990

I was at a book launch a few years back for some punk rock tome or other (the collected and collated Sniffing Glue, maybe…exact details escape me) that was being held in Notting Hill Gate’s subterranean “Arts Club”. After pressing sufficient flesh, handing out business cards and hoping the free beer might flow both freely and long enough to displace the heat and humidity that was making the venue an unpleasant swamp (free beer or otherwise), I decided I’d circulated enough, and picking my way past members of St Etienne whilst trying not to catch any of the sweat dripping profusely from Mark Lamarr (who looked hot and uncomfortable, in an Acapulco shirt), I walked up the stairs hoping to find some fresher air. Silhouetted at the top of the stairs stood a man for perhaps whom the term “insouciant swagger” was devised. Whilst everyone else around me was wiping fevered brows and fanning themselves with recently acquired punk rock tomes, this figure stood there in a leather jacket and just-so hair, looking like Mick Jagger in Performance, possibly taking a break between filming just around the corner. “You look like you could’ve been the singer in Thee Hypnotics,” I told him. “I was the singer in Thee Hypnotics,” he declared. If horses sweat, men perspire and women glow, this guy wasn’t even glinting. How cool was he?

“The moment Thee Hypnotics walk on stage the attitude hits you. They’re cool. Impossibly cool. They may be playing the most regressive sound in pop today but they’re too caught up in self-adulation to even notice. They defy their influences by taking them and unthinkingly mutating them into their own aural loop.” Melody Maker, September 1989

What was I grooving to back in the summer of 1990, more than twenty years ago? The Pixies? They were too plump, too ugly. Madchester? Forget it; I’d only just stopped wearing my 70′s friendly flares, and wasn’t about to invest in a new pair. Grunge was a distant noise that didn’t exist outside the Pacific North West or the odd Everett True article in The Maker. And no sooner than I’d stopped listening to “heavy metal” in favour of more gothic sounds, The Sisters had gone metal, The Cult had gone metal. Even my beloved Celtic Frost had even gone glam metal. I had been impressed by a very un-American sounding band called Mary My Hope in Plymouth the previous year, as they pulled their best Jim Morrison poses whilst supporting Fields Of The Nephilim. Weren’t American bands s’posed to sound and look like Poison or Motley Crue? I was still buying Kerrang!, more from a nine year habit than a need to find out what was hot and what was not on their office turntable. But then came this band who would command equal column inches in Kerrang!, The Maker and Sounds (RIP); four men in black, with cool Brian Jones hair cuts and even cooler leather jackets. I didn’t know where High Wycombe was, but it seemed to breed authentic enough looking rock stars who certainly talked the talk. If 1989 was a second acieed induced summer of love, then the lysergic acid diethylamide that these guys were feeding off was of a distinctly more Altamont flavoured variety. Their designated musical take on acid (rock) or garage (rock) owed infinitely more to 1969 than 1989.

“Thee Hypnotics care only for their own generic past and frenetic present. The future doesn’t even get a look in…Forget regression, this is reincarnation! Past, present and future!” Melody Maker, September 1989

Thee Hypnotics emerged from Buckinghamshire (but with their hearts firmly in Detroit) in 1988 with a 45rpm 7″ single called ‘Love In A Different Vein’. The singer on the cover (that guy’s gotta be the singer) – Jim Jones – had hair delivered courtesy of a Iggy Stooge, and the Iron Cross sported by guitarist Ray Hanson completed a look that was pure and classic Ron Asheton. But these guys were far more than Funhouse revivalists. They dug Hendrix, and the Stones too, filtered through James Brown and the MC5. With Will Pepper on bass, and Mark Thompson on drums (who was succeeded in 1990 by Phil Smith), this hoodlum looking foursome made a reassuringly righteous and rebelliously retro racket going against the grain of what was considered “in” at the beginning of the last decade of the 20th Century. The 1988 debut 45 was followed up in 1989 by a series of 12″ EPs for Beggars Banquet imprint Situation Two, including the self-explanatory “Live’R Than God” mini-album that was picked up by Sub Pop for US release (I appropriately managed to find my Sub Pop copy on clear vinyl in a used record store in Greenwich Village). Then in 1990 they released their full length debut, the fittingly titled “Come Down Heavy”. Now on Beggars Banquet in the UK (RCA in the US), and sporting an aptly psychedelic portrait of the four band members on the album jacket, the LP kicks off with lead single, the jerking, stop-start of ‘Half Man Half Boy’. The album title did not mislead or disappoint, with their brand of frenzied hard rock managing to be “heavy” without straying too near metal; Ray Hanson’s visceral, scratching lead guitar over Will Pepper and Phil Smith solid, but danceable, rhythm section saw to that.

“The raw power and the snot, the kick out the jams guerrilla attitude, is less important than the other veins of Sixties unease that they’ve hit: narcissism, narcosis, prostration, wastedness.” Melody Maker October 1989

These ten tracks, from ‘All Messed Up’ to ’Resurrection Joe’, through ‘(Let It) Come Down Heavy’, and closing with the epic ’Revolution Stone’, managed to go further in capturing the band’s onstage essence than the previous year’s live outing had managed.

“Personally, though, we still think the album’s better than a lot of other things around at the moment. There’s often this thing where people saying we’re backdated. So what if we are? Why follow fashion? But we don’t actually consider ourselves backdated. If we like something for what it is and if it sounds good…basically, f**k fashion, f**k it!” Jim Jones, 1990

America appeared to embrace the band, leading to touring the States, where perhaps unsurprisingly given their Sub Pop connections, the band played with grunge behemoths Tad.

“The States was brilliant, it was so positive. I think New York and Seattle were the best. Our show in Seattle was wild – we were supporting Tad – and it was more like a riot than a gig. There were people all over the stage. Then someone threw a butcher’s knife onto the stage that hit Will on the shoulder, bounced off and landed in Phil’s lap.” Jim Jones, 1990

As dangerous as Seattle crowds seemed to be, an unfortunate car accident on their Stateside jaunt left drummer Phil Smith immobilized with a broken pelvis. The Damned’s Rat Scabies was deputized behind the drum stool for touring duties for the remainder of 1990, before the band would return the following year with sophomore release, Soul Glitter And Sin.

This twentieth anniversary edition is now supplemented with the studio version of epic live favourite ‘Justice In Freedom’, their cover of Jimi Hendrix’s ‘Can You See Me’, and two single b-sides, ‘Nine Times’ and ‘Testimonial’ taken from the  flip side of ‘Half Man Half Boy’.