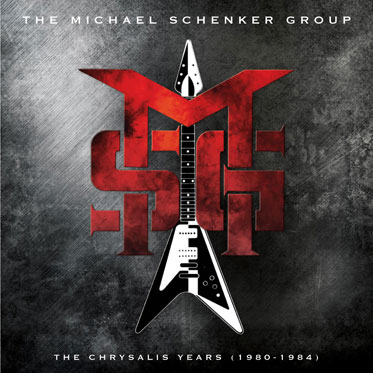 German guitar maestro Michael Schenker was born in Sarstedt, Lower Saxony, in 1955. A prodigiously talented guitarist, he joined his older brother Rudolph Schenker in German hard rockers the Scorpions whilst still in his early teens. Playing lead guitar on the band’s vinyl debut “Lonesome Crow” in 1972 at a mere 17 years old, the Scorpions developed a cult following in their homeland. A support slot with UFO in 1973 led to an invitation to join the British rockers when UFO’s then guitarist Bernie Marsden failed to make a gig in Germany. According to UFO’s Phil Mogg: “We had seen Michael playing with Scorpions previously, and thought he was just what we were looking for. On the night that Bernie didn’t make it we were desperate to play and get paid, just in order to get back home, to get petrol and food etc.  We asked Scorpions if we could borrow Michael, and they said yes, so after their set Pete and Michael sat in the back of a car and worked on ‘C’Mon Everybody’, ‘Who Do You Love’ and ‘Boogie For George’, which we managed to fill out for a whole set, jamming.”

Although UFO had already released two studio LPs, plus a live album recorded in Japan, where along with Germany, they had built up a healthy following, once UFO were augmented by Michael Schenker, they became a highly successful and fruitful partnership, signing a major label deal with Chrysalis Records, producing five studio albums from 1974’s Phenomenon up until 1978’s Obsession. The initial “Schenker-era” of UFO culminated with 1979’s major breakthrough live album, Strangers In The Night. A top ten hit, Schenker had already left the band by the time of the album’s release; Michael had walked out of UFO mid-tour on a couple of occasions, but left for good at the end of 1978’s Obsession tour. According to Phil Mogg: “”The Strangers…” album, with Michael departing at that time, wasn’t exactly a surprise; Michael had been and gone and come back many times. It was a case of get on with finishing the [Strangers…] album, which we did… It was a shame that Michael wasn’t there to enjoy the success, as he had put in as much work as everybody else.”

Looking at his options, Michael briefly rejoined the Scorpions for their 1979 “Lovedrive” album, before considering offers to join both Aerosmith and a recently solo Ozzy Osbourne, after 10 years of fronting Black Sabbath. Michael eventually decided to go “solo”, forming The Michael Schenker Group with vocalist Gary Barden, bassist Billy Sheehan (who would later find fame with Mr Big, David Lee Roth, Talas, and even enjoyed a brief stint with UFO on their 1983 “farewell” tour, replacing a recently departed Pete Way) and drummer Denny Carmassi (late of Montrose, but to later join Heart and Whitesnake). Staying with Chrysalis Records for their Roger Glover produced eponymous debut “The Michael Schenker Group” (UK No.8) now featured only Michael and Gary, augmented on a session basis by Don Airey on keyboards, Mo Foster on bass and Simon Phillips on drums. According to Sounds: “With repeated spins this album grows in stature until it eventually stands a good head and shoulders above most of the competition…you vill buy and you vill enjoy.” A top ten hit in the UK, and bolstered by the lead single ‘Armed And Ready’, a major theatre tour featured the line-up of legendary drummer Cozy Powell (previously from the Jeff Beck Group and Ritchie Blackmore’s Rainbow), bassist Chris Glen (from the Sensational Alex Harvey Band) and rhythm guitarist and keyboard player Paul Raymond, who had recently left UFO himself. Previously unreleased live recordings from that debut tour can be heard on this collection, caught in action at the Manchester Apollo on 30th September 1980.

The touring line-up of Schenker/Barden/Powell/Glen/Raymond wasted no time in recording a follow up album with producer Ron Nevison, simply titled “MSG” (UK No.14), but not before their first trip to Japan in 1981, where UFO had long enjoyed a huge following, and Schenker was revered with near god-like status. The second album certainly feels more like a Group effort than a solo album, as Robbie Millar’s 4 star review reckoned: “The oddest thing about ‘MSG’ is that the word ‘Group’ has definitely taken precedence over the words ‘Michael Schenker’. Schenker’s guitar is fairly immaculate throughout the elpee but certainly not dominant… I’d hazard a guess that in a few years time, “MSG” will either be hailed as a Rock Classic or completely forgotten. Taking all that into consideration, I rather hope the former to be true.”

Initially only intended for the domestic market, a number of dates on the 1981 Japanese tour were recorded for potential release, resulting in the double live “One Night At Budokan” (UK no.5), recorded at Tokyo’s legendary Nippon Budokan venue. Initially only available as a pricey import, selling for anything between £16 and £25 (a pretty penny in 1982), the double album would eventually get released outside Japan, and become another top ten hit. Philip Bell’s 4 star review predicted that: “If this short-fused, double barrelled dose of dynamite gets released out of the Land Of The Rising yen and into the UK at a price harmonious with the depth of British pockets… it shall bloweth all cobwebs off every dozing closet axe hero on these isles… it’s a gem.”

Despite three hit albums, both Cozy Powell and Michael’s management felt that The Michael Schenker Group needed a new vocalist in order to propel the group up to the next level and break the all important US market. After initially approaching Whitesnake’s David Coverdale, the band settled on former Rainbow vocalist Graham Bonnet. By the time this line-up recorded their only record, “Assault Attack” (UK no.19), Cozy Powell had already left to join Whitesnake for their “Snakes & Sinners” tour, replaced on drums by Chris Glen’s fellow former SAHB luminary Ted McKenna. Although they were booked to headline the Sunday night of 1982’s Reading Rock Festival, Graham Bonnet left after one infamous gig, a low-key warm-up show at Sheffield University. Gary Barden was swiftly reinstated, and the Reading show, broadcast on BBC Radio 1’s Friday Rock Show, went ahead after only a few hours rehearsal with their new/old lead singer.

The Martin Birch produced “Assault Attack” was released in October 1982, and despite featuring a now defunct line-up, the album artwork and ‘Dancer’ single featured Graham Bonnet’s photo. Receiving mixed reviews at the time, Sounds stated: “In the wake of the recent Bonnet/MSG split amidst tawdry scenes in shell-shocked Sheffield, this latest album can be viewed as a unique artefact of minimal proportions… Sure, Assault Attack is a good LP, but considering that it contains one of the best guitarists and one of the best vocalists in rock music it’s ultimately a bitter disappointment.” Despite this, the album has certainly stood the test of time, and is a much stronger set than contemporary reviews would suggest.

Despite this, the attendant tour went ahead, with this latest version of the band going on to produce “Built To Destroy” (UK No.23) in the autumn of 1983. The October 1983 gigs at London’s Hammersmith Odeon were filmed and recorded for a second live recording, “Rock Will Never Die” (UK No.24) released in June 1984, by which time The Michael Schenker Group had all but split up. Produced by Jack Douglas, the version of “Rock Will Never Die” included on this set is the original single LP version, and includes tracks from across all of Michael’s solo records to date. MSG’s second live album culminates with the UFO classic ‘Doctor Doctor’, featuring Michael’s former band-mates in the Scorpions, Klaus Meine and older brother Rudolph Schenker.

This set is completed by the 2008 remix of debut single ‘Armed And Ready’, which was produced for the game “Guitar Hero: Metallica”, available on CD for the very first time.