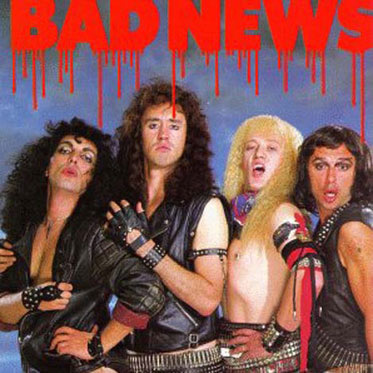 This is BAD NEWS

“They took every opportunity they could to either play guitars, throw grenades, fire guns or shag girls.”
“Half of them wanted to be rock stars and the other half wanted to be Clint Eastwood.”
Dawn French and Jennifer Saunders’ respective verdicts on the Comic Strip Presents…team

You thought spoof heavy metal bands began and ended with the immortal 1984 feature film This Is Spinal Tap? Wrong! You think the only ironic bunch of British heavy metal, comedy buffoons are The Darkness? Think again. Although the origins of Spinal Tap do go back to a series of skits on the US comedy show Saturday Night Live in the late seventies, Bad News hit British TV screens in January 1983, more than a year before the release of Spinal Tap the movie. You’ve heard rumours that Queen are reforming with Justin Hawkins replacing Freddie? Well, this band were releasing Queen covers, produced by none other than Queen guitarist Brian May, sixteen years before Permission To Land, landed.

Although The Comic Strip Presents Bad News Tour was originally screened on UK’s then fledgling Channel 4 on 24th January 1983, the band had made their TV debut the week before, performing the song ‘Bad News’ on Friday night’s The Tube, followed by a brief interview with the show’s co-presenter Jools Holland. Intended as a plug for the following week’s “documentary” (the term Rockumentary™ had yet to be coined), footage from that appearance on The Tube, where they appeared to split up live on screen, did show up on the inevitable sequel, More Bad News in 1988. Although this was the fourth episode of the first series of The Comic Strip Presents…, three of the four members of Bad News would have been more familiar to TV audiences as Rik, Vyvyan and Neil, three quarters of BBC2’s “anarchic” sitcom The Young Ones, which was first broadcast in November 1982. The Comic Strip’s Peter Richardson was in line to fill the fourth spot in The Young Ones, but moved on to develop The Comic Strip Presents…after a disagreement with producer, Paul Jackson. The Young Ones’ Neil, is fairly interchangeable with Bad News’s rhythm guitarist, Den Dennis (as played by Nigel Planer). Though Vyvyan (as played by Adrian Edmondson), with his orange, spiked hair, on initial inspection appears to be a punk rocker, his Whitesnake and Rush t-shirts reveal a heart that is “VERY METAL”, something that Bad News lead guitarist, lead singer and front man Vim Fuego (real name Alan Metcalfe) would approve of. Bad News is completed by bass guitarist Colin Grigson, as played by Rik Mayall and Peter Richardson as drummer Spider Webb.

Where as The Young Ones, written by Ben Elton, Lise Mayer and Rik Mayall, was an instant success on BBC2, Bad News Tour ably demonstrated Adrian Edmondson’s talent as a comedy writer. Directed by Sandy Johnson (who incidentally also plays the director in the film), Bad News Tour takes the form of a “behind the scenes” documentary of a British heavy metal band as it travels on its way to a gig in Grantham. In many respects, Bad News are very much a reflection of the last dregs of the New Wave Of British Heavy Metal (or NWOBHM) scene that spawned Iron Maiden, Def Leppard and Saxon, as well as hordes of less memorable acts, just before 80’s hair-metal and glam rock usurped leather biker jackets and ripped denim. Where as Spinal Tap dealt with the diminishing returns of a once wealthy and famous band whose audience was now more selective about who they pay to see, the unsigned Bad News are very much at the other end of the rock ‘n’ roll spectrum, touring the UK in a beaten up Transit van. Heavy metal can be a very conservative, and sometimes quite precious musical form, but typically heavy metal music and its fans do have a sense of humour, something that was definitely required by anybody prepared to listen to a 46 minute drum solo! Just like Spinal Tap a year later, Bad News was happily accepted by the readership of Kerrang! and Sounds in the UK press, who became the group’s main champions. Bad News Tour also featured Dawn French (playing school girl Tracey, picked up by the band on her way to school), and Jennifer Saunders (as rock journalist Sally Freidman).

After apparently splitting up live on The Tube in January 1983, little was heard from Bad News until August 1986 when they were billed to appear at the seventh annual Monsters Of Rock festival at Castle Donnington, sandwiched between Motörhead and openers Warlock, on a bill that also featured Def Leppard, Scorpions and headlined by Ozzy Osbourne. Footage of the concert was slated to make up the bulk of the Bad News sequel, More Bad News. Until he made some very public criticism of the event’s organisation, perrenial Friday Rock Show DJ and all round good bloke Tommy Vance compered the event. I happily joined in with the chant of “Tommy is a wanker!” or “You fat bastard” with the rest of the crowd, as he appeared on stage wearing a protective helmet. The hurling of debris is something one sees relatively little of at concerts today, but it wasn’t unheard of at rock festivals twenty years ago to spend as much time looking behind you for incoming open bottles of piss, bin liners of sick and other assorted missiles as watching the stage. Lemmy even threatened to leave the stage during Motörhead’s set, as lit fireworks were hurled at the band. Unsurprisingly, and seemingly invited, the biggest barrage was saved for Bad News. Although Bad News’s musical prowess was seriously questionable, their set was on the whole very funny, entertaining and well received.

No strangers to the pop charts, Nigel Planer, capitalising on his guise as Young Ones’ Neil (to the slight chagrin of his Young Ones co-stars) had a number two hit single with a cover of Traffic’s  ‘Hole In My Shoe’ in July 1984, taken from his Neil’s Heavy Concept LP. Teaming up with Cliff Richard, all four Young Ones had a chart topping charity single with Richard’s ‘Living Doll’ in April 1986. Bad News issued their first single, a somewhat risible cover of Queen’s ‘Bohemian Rhapsody’, in September 1987. Bizarrely, the single was produced by Queen’s Brian May and issued by Queen’s label, EMI, in the UK. The release was accompanied by a suitably silly promo video.

Screened in February 1988, More Bad News was the second episode of the fourth series. The basic premise of this sequel was to follow the band’s reformation five years after their far from amicable break up on live TV. The four members of Bad News are reunited when they are offered a record deal, not with EMI, but in fact with “Frilly  Pink” (a record label just for gays). Reprising her role as Sally Freidman, the second Bad News programme again co-starred Jennifer Saunders, as well as Dawn French, this time as Rachel, the band’s A & R person. The band are seen recording their first single for Frilly Pink, ‘Warriors Of Ghengis Khan’, as well as making the promo video for the release, all leading up to their unforgettable performance at the Castle Donnington Monsters Of Rock festival. Motörhead’s Phil Taylor, Ozzy Osbourne, the Scorpions’ Rudolph Schenker and Def Leppard’s Phil Carlin (sic) all share their (quite poor) opinions of Bad News. Marillion’s Fish described them as “a heavy metal Sheena Easton” (Ms Easton had risen to fame in the late 70’s after appearing in a then quite pioneering reality/search for a pop star show), but the most articulate is unsurprisingly Lemmy Kilmister: “Bad News set a new high in altruistic, self-indulgent, bullshit, molly coddled…I thought it was a piece of pimply shit from the worst kind of city ghetto, probably populated by winos, junkies and just general all-round fuck-ups.” Nice.

To coincide with the More Bad News programme, a full length LP was issued by EMI (and not Frilly Pink, as the show would have us believe). The LP featured such classics as the anthemic ‘Hey Hey BadNews’, the incendiary ‘Warriors Of Ghengis Khan’, the single ‘Bohemian Rhapsody’, the omnipresent ‘Bad News’, the revealing ‘Masturbike’, and finishing off with the self explanatory ‘Drink ’Till I Die’. Although their eponymous debut made a fair crack at attempting to produce some semblance of music, which is sometimes more punk than metal (at least in spirit and attitude), in truth, the recording owes far more to releases such as The Troggs Tapes; a legendary, illicit recording of the dialogue between The Troggs in the studio as they attempt to make a new record, with hilarious results.

Somewhat inevitably, the release was supported by an actual Bad News tour, where the band appeared at UK theatres and universities, and even included a slot supporting Iron Maiden at the Hammersmith Odeon on the last date of their Caught Somewhere In Time tour. A pair of dates at London’s Marquee Club in Soho’s Wardour Street towards the end of 1988 proved to be value for money. Compere Ben Elton received suitably enough stick from the metal hungry crowd, before the band took the stage. Colin Grigson having to hum the bass solo to The Who classic ‘My Generation’ had to be heard to be believed. Guitarist Vim Fuego proved to be more of a virtuoso on the electric guitar than anyone had previously given him credit, before he dropped his axe mid solo, and with his guitar apparently still playing, Brian May appeared from behind the amps, joined by Jeff Beck, for an “all star jam”. A cover of ‘Twist And Shout’ even featured backing vocals from French and Saunders in their best 80’s rock chick finery. The only down point was when a beer mug hurled at the stage cut Nigel Planer’s nose, which was picked up by The Sun tabloid newspaper.

This release features the whole of the original album, augmented by two rare tracks, ‘Life With Brian’ and a cover or Roy Orbison’s ‘Pretty Woman’, both of which featured as b-sides to the ‘Bohemian Rhapsody’ single. Also included are two versions of the ‘Cashing In On Christmas’ single, as well as four tracks from the second album, which was simply entitled Bootleg. If classic hard rock acts like Deep Purple, Led Zep’s Page and Plant and Black Sabbath can settle their differences long enough for a reunion tour, let’s hope Bad News can one day do the same, but this anthology should keep you quiet whilst we’re waiting.