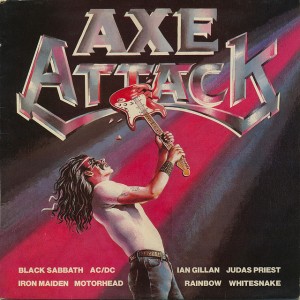 If a band wasn’t on “Axe Attack” (K-Tel – 1980) or “Axe Attack Vol II” (K-Tel – 1981) –  or at least given a fair airing on Tommy Vance’s Friday Rock Show – then the chances are I would not have discovered them until much, much later. I never really got into Van Halen, or KISS, or even Deep Purple for that matter, until a long time afterwards as they weren’t featured on either of these collections. “Axe Attack” introduced me not only to acts I already knew and liked (AC/DC, Black Sabbath, Motorhead), but also to more exotic things I certainly would not have otherwise heard (Frank Marino & Mahogany Rush, Aerosmith, Ted Nugent). Although the release was no doubt partly the result of the New Wave Of British Heavy Metal scene of the late 1970s and early 1980s, other than Iron Maiden, no other NWOBHM-era bands were featured on volume one; so no Tygers Of Pan Tang, no Angel Witch, no Diamond Head, not even the chart-friendly Saxon. The NWOBHM was slightly better acknowledged on “Axe Attack Vol II” with the inclusion of a track by Def Leppard and by Samson (featuring Bruce Bruce, soon to join the aforementioned Iron Maiden). With limited financial resources, my pocket money had to be carefully spent, usually on ex-chart 45s sifted from the bargain bins of Woolworths, WH Smith and Boots. LPs such as “Axe Attack”, for a reasonably small outlay, allowed you access to a wide variety of cool records that didn’t get played on the radio (in the UK, at least). Without an older brother, cousin or uncle interested in rock music, and in a pre-digital age, one would be negotiating the local record shop without a map, which leads me to…

As a designer, I’m always preaching the importance of the use of the right imagery and the decisions made for appropriate logotypes as an instant visual language to convey what music is held within the LP jacket or CD jewel case – and the subsequent reduction in the importance, or even need, or physical artwork is something else to lament in the digital age. I have often bought albums on the strength of the cover, and see nothing wrong with that. The logo design used for “Axe Attack” alone tells you that it’s a heavy metal album, and one I’d no doubt took time to copy into my sketchbooks and school diary. Likewise, the lone, long haired “axeman”, swinging his Stratocaster style “axe” into the logo instantly confirms that this is definitely a “rock” album, a “heavy rock” album, a “heavy metal” albums – which is certainly how you would have described the bands within (Whitesnake, Girlschool, UFO) at the time.

So if I don’t feel any great nostalgic kinship with KISS, Van Halen or a host of other contemporaneous bands, blame K-Tel records for never including them on “Axe Attack”.